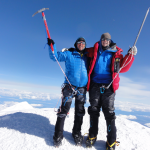 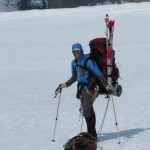 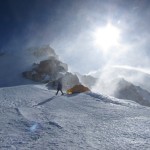 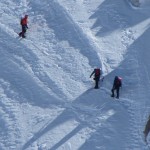 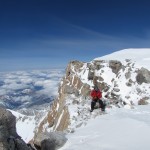 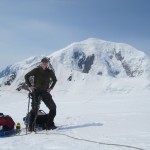 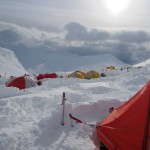 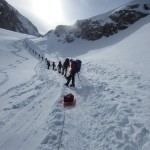 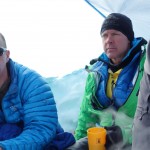 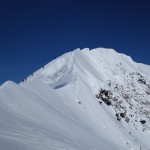 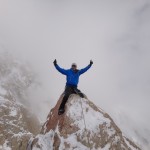 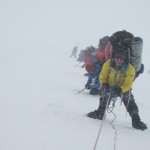 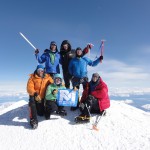 While climbing down from Mt. McKinley in June, Bruce Terry heard the climber above him, who was linked to him via a rope, yell, “Falling!”

At that point Terry’s training and practice took over.

“The climber behind me had fallen,” said Terry, 53. “He fell and took the guide down, too. We’re trained in how stop a fall of your team members. We’re supposed to do a self-arrest. Basically, we dig ourselves into the ice right where we are and hope for the best.”

“It never happened before that I had to do it, but we’ve practiced it many, many times,” said Terry. “Every time we’re on a glacier, we practice it. When the gentleman behind me yelled, ‘Falling!’ I immediately came to this position and the next thing I know, I was holding the two of them until they both got their footing and climbed back up.”

From his spot, Terry couldn’t see, he could only hear what was happening.

“The position I’m in, I’m like an ostrich with my head in the ground,” said Terry. “I’ve got an ice ax on my chest. My entire body weight has thrust that into the ice and snow. And my feet, with crampon spikes, are dug into the snow. And literally my head is dug into the snow. So I can’t see what’s going on. I can’t move to see what’s going on. I have to rely on what I hear. All I can do is just wait until they told me it was OK to get up.”

“All I kept thinking about was, wow, this stuff really works and I held the two of them,” said Terry. “I was scared but I was the lucky one because I knew where I was. I was planted firmly in there so I had control.”

Later, his guide told him, “Well, it looked like all that training paid off.”

Although at this spot on the peak, the falling climbers would likely have slid for a while but likely survived. “I don’t think it would have been one of these slide to your death moments,”he said.

It was about 30 degrees below zero and the climbers were at about 16,000 feet, trying to reach Camp Five at 17,000 feet, when a windstorm began to pummel them.

“We had some hellacious weather,” O’Mara said. “We had just gone up this steep headwall and the weather turned south on us and a windstorm developed, so it was too cold and windy to go [back] down to Camp Four, so we had to make an emergency camp site,” said Brady. “It was scary.”

Terry added, “We literally had to chop out a [10-foot-wide] platform at the side of the slope to have a tent that was level -otherwise your tent would have been pitched at 25 degrees -once our guide made the decision it was unsafe to go further. There was horrible wind and cold. We had to take our ice axes and shovels and build a platform for all three of our tents.”

“You’re taking out something that’s the thickness of a parachute, it’ll blow right away and you won’t have a tent,” Terry said. The climbers carry everything they need with them, and if something drops or is blown away they are in trouble, Terry said.

“We really felt like we were going to get blown off the mountain,” said O’Mara. “At that point we got into the tent about 4 p.m. We had four of us in a four- man tent. We had four of us in the equivalent of a king sized bed. And so we were in there, this was with all our gear and everything.”

“At that point, myself and two other guys, felt we didn’t feel safe,” said O’Mara. “We started thinking of our wives and kids. So the next morning when the guide came to say it’s time to go, I said I was done.”

The guide told him there was no one to take him back down the mountain and climb to Camp Five to sort it out.

“These other two guys who said they were going to quit, never said a word,” said O’Mara. “Being a team player, I sucked it up and kept going.”

O’Mara who also nearly quit the first day due to “agonizing” hip pain from a poorly distributed load, again wondered if he could go on.

“When we got to Camp Five, it was one of my tougher days,” said O’Mara. “About dinner time that night the guide said we were going to the summit the next day. These other two guys are looking at me, like we can’t do this. I’m thinking about it all night: Can I? Can’t I? Back and forth, counting up all the little nagging injuries that you have.”

“The next day came and we had clear blue skies,” said O’Mara. “The wind had died down. And the guide said, ‘If you can’t climb Denali today, you can’t ever climb it.’”

O’Mara, Terry and two others then climbed to the summit, along with three guides from RMI.

“The weird part was, somehow I reached the summit,” said O’Mara. “When you quit twice and you still get there, it seemed like the hands of fate were pushing me to the top.”

Along with Mt. McKinley, these are the highest peaks on each of the seven continents. O’Mara, a marathon runner, got interested in climbing when a college friend asked him to come climb Mt. Kilimanjaro with him and while flying to Africa, he read a book, “Seven Summits” about Dick Bass, the first man to climb all seven.

O’Mara thought, “If he could do it, why couldn’t I?” He also named his physical therapy practice Seven Summits.

Terry is uncertain if he would climb all seven summits, but he plans to keep practicing with O’Mara and continue to climb with him. The two men met in 2007 while both were hiking on Valley Forge Mountain with their dogs. They went to Russia together in 2010 to climb Mt. Elbrus.

Terry’s first “real mountaineering trip” was a 2005 trip to Mt. Rainier [14,409] in Washington State. It was a gift from his wife, Susan, who’d read an article about it and thought he’d enjoy climbing it.

Meanwhile, both men continue to train nearly every day.

While training to climb Mt. McKinley they pulled 60-pound loads in trailers and carried 60-pound back packs.

“We got a lot of stares,” said Terry. “We’ll keep training together. We make a good team.”

On Mt. McKinley, when O’Mara had a bad day, Terry would have a good day and vice versa.

“I’m very impressed with his physical ability,” said Terry. “He definitely was an inspiration to me.”

“We picked one another up when we had to,” said Brady. Many people say Mt. McKinley is tougher than Mt. Everest because the incline is steeper and the air thinner at a more northern latitude, Brady said. There were many times, “I was out of my comfort zone,” he said.

Getting to climb mountains and be where few others trek offers them satisfaction.

Terry, who lives in Wayne, has a daughter, Caroline, 21, who is a student at Lehigh University and a son, Henry, 13, who attends the Haverford School.

O’Mara, also of Wayne, lives with his wife, Jane, daughter, Ellie, 12, a student at Tredryffrin/Easttown Middle School, and son, Dylan, 10, a student at Devon Elementary School.

This article was originally published on https://www.mainlinemedianews.com.

After more than two years of pandemic rules and restrictions, we are seeing the end in sight! But, because of the continuing information both positive and negative regarding infection rates and spread of variants, our office has made the decision to continue to recommend the wear of a mask in our office. We will continue to monitor the changes to best practices as they evolve.

Please contact our office to make sure all paperwork has been properly completed prior to arrival. Please contact our office to reschedule if you are sick or someone that you have been in contact with is sick. We need to protect our staff and all patients coming to our office(s). Please wear a mask when entering our office. Due to the aerosol nature of our practice, we feel that mask-wearing is still very important inside our office(s). Please ask us any questions and alert us to any concerns. Dr. Bruce Terry DMD and Susan Silberg DMD.