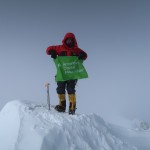 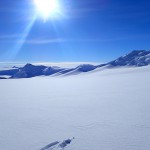 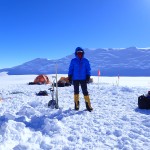 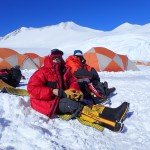 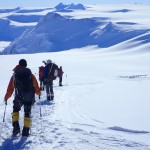 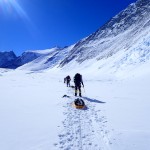 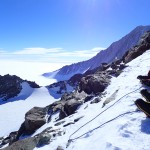 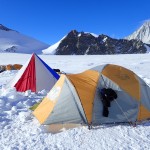 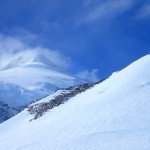 I approached the narrow ledge last, as anchor on our five-person rope team, and made sure to secure myself safely to the fixed anchor before I sat down to rest. I can’t explain exactly what happened except to say that my pack slid off my shoulder and down onto the ledge. Before I had a chance to secure it to the anchor my pack slipped away from me. In horror my teammates and I watched it slide 2500 feet down the mountain and disappear, leaving a yard sale of clothing and equipment across the ice. In that moment I was physically and emotionally paralyzed. I have always been a strong, capable climber who helped others when problems arose. To have done something so dangerous as to lose all my gear left me in shock. For a few seconds I was numb. But very quickly my mind began to race as did my heart. If my sleeping bag, my heavy parka, or any single piece of critical gear was lost or destroyed it was game over for me, and possibly the entire team. We came as a group and would have to turn back as a group.

On Vinson Massif, Antarctica, there is no margin for error.

You might wonder why a Main Line dentist would be on the slopes of the largest mountain in the world’s most inhospitable place.

It all began when my wife surprised me with a trip to Mt Rainier, Washington in 2005. She had read an article in which author described the climb as both torturous and exhilarating. She said, “This sounds just like you.”

Over the next 12 years I increased my skills by climbing on ice, rock and snow. I travelled around the world and completed climbs on the highest peaks in Africa, Europe, South America, North America, and Indonesia. For a climber, the “Seven Summits” are the ultimate goal, the mantra: Kilimanjaro, Elbrus, Aconcagua, Denali, Carstensz, Vinson, and Everest. The Vinson Massif, Antarctica and Mt.Everest in Asia were the two remaining peaks I had yet to summit.

Dave Hahn and three other climbers in Antarctica. Dave is a storied climber with 15 Everest Summits and 35 of Vinson. In the high altitude climbing world he is “the” guide.

There are two styles of climbing. Alpine climbing involves carrying heavy loads to each camp, always moving forward. We were using expedition style climbing, where we carried some gear to a higher camp and then returned to our lower camp to sleep. This method allows for acclimatization as well as moving gear up the mountain incrementally. Some feel that expedition style climbing makes the trip to the summit longer and makes the climber retrace ground already covered, but it’s known to make the climber stronger and more acclimatized to high altitude.

Our expedition lasted for 12 days with temperatures between -5 and -30 degrees Fahrenheit. On our second trip up the steep fixed ropes from low camp to high camp my pack slipped away from me at a rest break and fell more than 2500 feet. Miraculously, everything was accounted for except for one pair of socks. Our team descended to retrieve my gear and return to low camp, which may have been a blessing in disguise. A strong storm came in that night with snow and wind gusts in excess of 80 mph, lasting 36 hours.

The tent I shared with two other climbers began to tear and the poles began to break 24 hours into the storm. By the end the tent was trashed and we would have to make a trip to base camp for another tent.

It would be another three days before we climbed to high camp and then to the summit, arriving on Dec 7th. Making the summit on any expedition is the goal, but my 15-year-old son says it best, “Going to the summit is optional, coming home is mandatory!”

We had conquered the mountain after it had almost conquered us. We had built friendships and trust. I am always amazed at the self-reflection that takes place during and after an expedition. I find myself thinking more about who I am and where I fit in. Each new adventure teaches me a little more about myself.

This article was first published on https://www.mainlinemedianews.com.

After more than two years of pandemic rules and restrictions, we are seeing the end in sight! But, because of the continuing information both positive and negative regarding infection rates and spread of variants, our office has made the decision to continue to recommend the wear of a mask in our office. We will continue to monitor the changes to best practices as they evolve.

Please contact our office to make sure all paperwork has been properly completed prior to arrival. Please contact our office to reschedule if you are sick or someone that you have been in contact with is sick. We need to protect our staff and all patients coming to our office(s). Please wear a mask when entering our office. Due to the aerosol nature of our practice, we feel that mask-wearing is still very important inside our office(s). Please ask us any questions and alert us to any concerns. Dr. Bruce Terry DMD and Susan Silberg DMD.